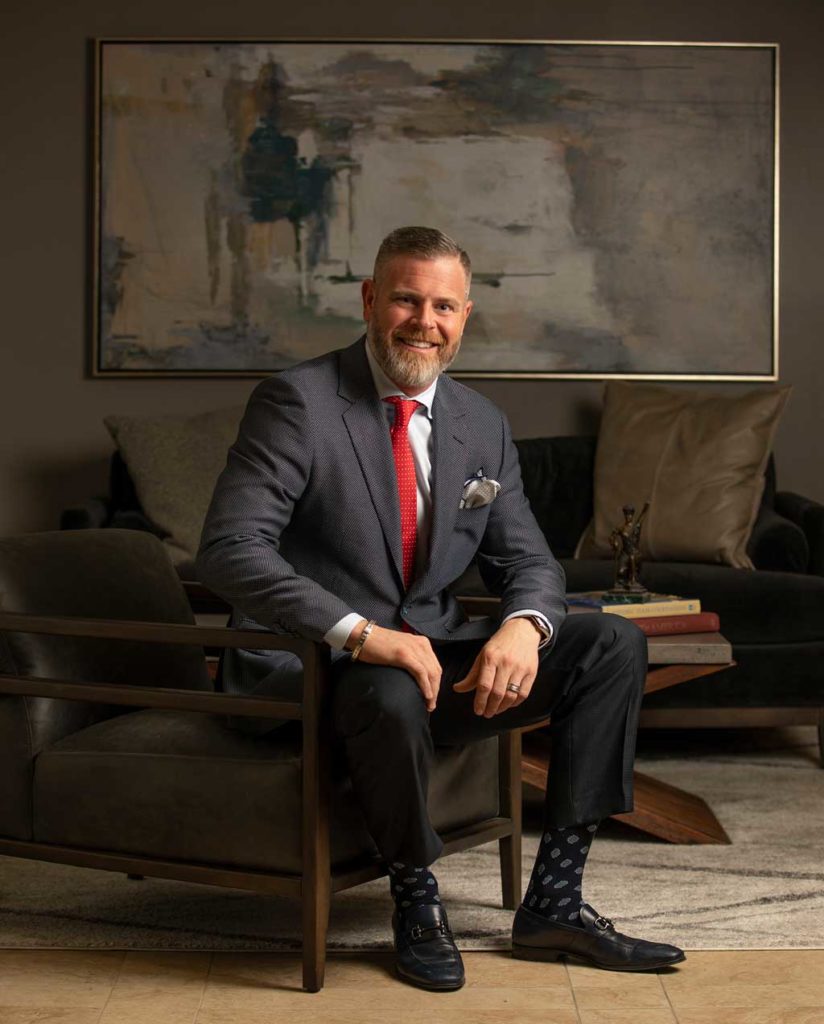 Chad Pinkerton was born and raised in Texas. Although he grew up in Dallas, Texas, he spent much of his youth on his grandparents’ farm located in the small town of Hedley, Texas, about 70 miles south of Amarillo. Some of his fondest childhood memories are those spent on the farm, working the fields, going to cattle sales, and enjoying small town Texas life.

Mr. Pinkerton excelled in sports in high school, especially in basketball where he was a three-year varsity letterman for the Lake Highlands Wildcats and named All-District his junior and senior years. However, it probably was not Mr. Pinkerton’s athletic prowess, or lack thereof, that drove him to the top while playing sports in high school. Chad Pinkerton was best known as a tenacious competitor with a “never-say-die” spirit. He was the guy you hated to play against, but loved having on your own team.

Upon graduation from physical therapy school, Mr. Pinkerton began working in the area of orthopedic and sports rehabilitation. He excelled in the medical community, eventually starting Premiere Physical Therapy with two very highly regarded orthopedic surgeons in Dallas, Texas. The company immediately prospered and Chad Pinkerton treated patients on a daily basis. Despite his success and his satisfaction with his work, Mr. Pinkerton felt somehow unfulfilled. Thoughts of becoming a lawyer were constantly at the forefront of his mind. Ultimately, Mr. Pinkerton determined that it was his life’s calling to be a lawyer and decided to leave his thriving company for the opportunity to attend law school. Leaving everything behind in Dallas, he did just that, moving to Houston, Texas to attend the Univsersity of Houston Law Center.

Mr. Pinkerton graduated Summa Cum Laude from the University of Houston Law Center, finishing third in his class of over three hundred graduates. While in law school, Chad Pinkerton was an editor for the University of Houston Law Center Law Review. His comment paper, “Supremely Misplaced Judgment,” received the award for Most Outstanding Comment Paper in the Area of Civil Rights. In addition, Mr. Pinkerton received numerous awards, recognitions of excellence, and academic achievement scholarships while in law school, including being selected to the Order of the Barons, Order of Coif and the Advocates Society. Mr. Pinkerton was also on the Moot Court team where he participated as a brief writer and made successful oral arguments during competition. Mr. Pinkerton was a decorated member of the Admiralty Moot Court Team.

Upon graduation, Chad Pinkerton received offers of employment from virtually every large firm in Texas and others nationwide. Desiring to pursue a career in both personal injury and commercial litigation, Mr. Pinkerton elected to join one of the most prestigious litigation boutiques Houston had to offer. While at this firm, Chad Pinkerton worked on many high stakes cases with some of the best lawyers in Texas.

Being the best at someone else’s law practice simply was not enough for Mr. Pinkerton. At heart, Mr. Pinkerton has a gunslinger’s mentality. He is a risk taker. He has always had the confidence in himself to bet on himself. So, in 2006, Mr. Pinkerton founded The Pinkerton Law Firm, PLLC. In the inception year of the firm, Mr. Pinkerton represented over 150 individuals against British Petroleum for the explosion that occurred on March 23, 2005 in Texas City, Texas. That case was tried in 2007, with an extraordinary resolution being secured for Mr. Pinkerton’s clients before the jury rendered its verdict.

Mr. Pinkerton now continues his success at The Pinkerton Law Firm, PLLC. The firm has grown exponentially over time and its successes continue to mount. Mr. Pinkerton’s focus is to “make people, places, and things safer—one case at a time.” Currently, Mr. Pinkerton represents hundreds of injured people in all walks of life. This is his life’s passion.

Mr. Pinkerton is an aggressive lawyer with one thing on his mind—winning for his clients. He understands that his clients only get one shot at recovery and that it is his job, in fact his duty, to do his very best on every case in his office. Consequently, each case at The Pinkerton Law Firm, PLLC receives his personal attention.

Have you or a loved one been injured?

Available by phone 24 hours a day.